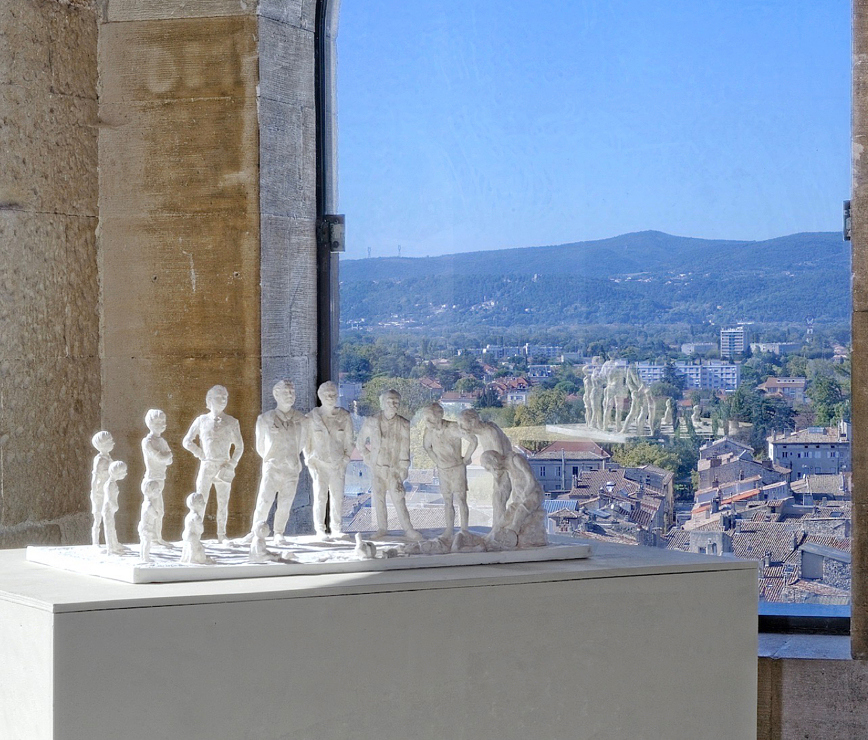 The Foundation gathers poets, writers and musicians for an evening of poetic readings through images and music on the theme of the transformation.

Isometries similarities anticonforming geological transformations homographic equivalent reversals revolutions metamorphosis . And in the prime of life, the book. To learn, to write, to read. The book to transform. To transform the world. Poetry. The link. Honey. Sowing madly. Sowing madly so that tomorrow marvels will grow.

And poetry also transforms itself into rhythms, music, dance and images…

Should you wish to read a text with us in the last part of the event, send us your texts here.

1) Gregory Chalier (1992) started playing the flute at the age of 8 and at 19 he was admitted to the entrance exam of the Haute Ecole de Musique in Genève in Michel Bellavance’s class. He also took lessons from the great masters and is currently perfecting his skills with Adam Walker (solo flute of the London Symphony Orchestra) and, from Spring 2021, he will be a member of the PPCM academy (Performance Practice in Contemporary Music) of the Klangforum Ensemble (Austria). As a starter, he will play for us Incantations No. 3 by André Jolivet : Pour que la moisson soit riche qui naîtra des sillons que le laboureur trace. So that the harvest of beauty and encounters may be rich in this evening of “Transformations”. He will also play, in duet with Nikias Imhoof, André Jolivet’s Fantaisie-Caprice for flute and piano.

2) Vincent Barras has a dual literary and medical background. He is also Professor of History of Medicine at the University of Lausanne and director of the University Institute of History of Medicine and Health, but he is also a poet, performer and great specialist in sound poetry. His long list of publications includes both scientific reference works and poetic antologies. He translates numerous works from Italian, English and German into French. In short, he is an extraterrestrial. Besides, for his 17 December reading, he had disappeared in the mountains. Today he may be with us… to make us hear his “Transformations”.

3) Born in Athens in 1979, Krystalli Glyniadakis is a Greek writer, poet and translator. Cosmopolitan and polyglot, she studied philosophy, politics and creative writing in England and has also worked and lived in Oslo and Istanbul. She speaks and writes in Greek, Norwegian and English, and practices French and Turkish. She writes articles for the press in Greece, the UK and Norway. She is a member of SHARING PERAMA, an artistic and cultural project initiated by Barbara Polla in Perama, Greece, and she translates Robert Montgomery’s poems into Greek. She is the winner of the National Poetry Prize in Greece in 2018 for “Best Poetry 2018”. For “Transformations”, it will be Massive Scale.

4) Nikias Imhoof is a pianist, poet and photographer. He lives and works in Geneva, where he performs his poetry, exhibits his photographs and gives piano concerts in all possible contexts. He has participated in several Equinoxes and for “Transformations” he will read L’âme et l’ancolie (it almost looks like… melancholy?). He is also going to transform himself again as a pianist to accompany Gregory Chalier on the flute to interpret André Jolivet’s Fantaisie-Caprice for flute and piano.

5) Marion Collé thinks and creates with her body. A former student of the Académie Fratellini, she completed her circus training at the Centre National des Arts du Cirque before becoming a circus artist. Poetry is the second thread in the life of this artist who gave birth to Autour du domaine, freely inspired by a collection by Guillevic, then published Être fil by Bruno Doucey. She creates the Collectif Porte27 and collaborates with Véronique Caye. She lives. For ” Transformations ” she will read/perform Mon corps s’ouvre.

6) Born and raised in the coal mining country of Western Pennsylvania, Matthew Amendt “cut his teeth” training and performing, in the US and abroad, with the famed Guthrie Theater out of Minneapolis. Making his NY debut in 2009 as the title role in HENRY V, the NY Times described him as a distinctly cool King Henry. In 2014 he won the Emery Battis Award for the role of Prince Hal in HENRY IV PARTS 1 AND 2, and in 2018 his work as HAMLET was lauded by the Pittsburgh Post-Gazette as one of the Top Three Productions of the Year, and he was named Leading Man of the Year. He will read to us a most wonderful speech about transforming in HENRY IV PART 1: Prince Hal speaking to his father.

7) Writer, director, film director, Manuela Morgaine has been directing Envers Compagnie, a landmark of independent creation, since 1991. Laureate of the Prix de Rome in 1994 and of the Villa Médicis Hors les Murs in 2004, she has just published Le Temps a Commencé de Cesser – Poèmes Oraculaires, published by Fabulla. She read for us the human fragility last November, from the barge Saturn, her place of life, and for “Transformations” she will read an extract from POUR WAAD, an archive film from Syria before the war, in progress, dedicated to Waad Al-Kateab, director of the unforgettable POUR SAMA. To reconstruct in images what has been destroyed and transformed by the archive.

8) Danish poet and artist, Morten Søndergaard (1964) has published many books of poetry, received as many literary awards and translated Jorge Luis Borges into Danish. He co-founded the experimental poetry collective Øverste Kirurgiske. The protean work of the artist combines writing, sound art, material work and performance. In Morten Søndergaard’s universe, books of poems rub shoulders with ready-made, artist’s books, engraved marbles, pages where asemic writing unfolds. Language is an active principle, as in La Pharmacie des mots, a work translated into about ten languages, published in France by Joca Seria and from which he will read extracts in English.

10) Olivier Liron publishes with Alma Éditeur and soon with Gallimard. Alma asserts that “Literature is the art of not enclosing sentences in a communication mechanism”. By this yardstick, the love story Danse d’atomes d’or is pure art just like Neige, a poetic play dedicated to the bonds between mother and son. Olivier had read La vie rêvée des mousses, another dialogue between son and mother about life and living things through botany, on 17 December. For ” Transformations “, he has a surprise in store for us…

11) Anne Kerner is a woman of art and culture. Journalist, art critic, video creator, director of the series “Je suis”, she never stops highlighting artists and bringing their works to life, first with ouvretesyeux.fr, now with artvisions.fr. She is also a great lover of Henri Michaux. For “Transformations”, she will read us some mescalinian texts…

12) Clara Molloy is a poet, but also the publisher and creator of the perfume brands Memo Paris, Floraïku and Hermetica. In 2019, she created the visual poetry festival Cinéhaïku and published Tempe a paia in Cheyne’s grey collection. Straw as a symbol of fragility. The grain and bread of the poem. For her, poetry gathers together what is supernatural. She also wrote the beautiful little book Grandirs (always for Cheyne) – we have a preference for small books when they are great… For “Transformations”, she will read an excerpt from this book.

13) A former management controller and car journalist, Antoine Dufeu is a poet, writer and playwright, professor, editor, reviewer and associate author at the CNEAI (2020 and 2021). A promoter of hybrid and critical literature, he founded the Lic research platform in 2012 and in 2015, with Frank Smith, the review RIP, an unidentifiable literary object. He co-founded and co-directed the journal MIR (two issues in 2007 and 2009). He is responsible for the writing and publishing division of Strate design school. He writes: “We definitely need to rethink politics, otherwise any rebellion will sooner or later be destined to transform itself, faster than the shadow it casts over the first hours of its demonstrations, into tokens that can be exchanged in the first cashier’s window of the local casino… ». He will read an extract from his latest book, Sofia-Abeba (MF, 2020).

14) Joana Hadjithomas & Khalil Joreige were born in Lebanon. They meet each other at eleven. Their loving and creative relationship begins when they are nineteen. Since then they have lived and worked together, never without each other. Marcel Duchamp Prize in 2018, artists, authors and directors of numerous films including the sublime Je veux voir, they are constantly in search of their own history, that of others, of Lebanon and the world, of those kept secret. And like their country, they are in constant transformation. They will read us some fragments of the Arab Apocalypse, a magnificent collection of poems by Etel Adnan.

15) Hélène Matte is a poet and visual artist, PhD in Literature, Performing and Screen Arts, Hélène Matte combines orality with video, writing with drawing, creation with action. She uses subject words and gesture-images. She has participated in the international poetry festivals of Trois-Rivières in Canada, Namur in Belgium, Périgueux in France and Bogota in Colombia. She is pursuing her research at Laval University, as part of a doctorate in Literature, Performing and Screen Arts. Ephemeral gestures, aging of the body, flight from orality, obsolescence of technology, lability of the digital: Hélène Matte celebrates the passage and transformation of the moment and will read to us…

16) Selected authors of the call for texts:

Nelly Gérouard and Jean-Marc Baude, both multidisciplinary artists created DEPANNE-MACHINE, at the crossroads of a label and a two-headed group of artists. “DEPANNE-MACHINE does not work within our contemporaneity in the field of an established, reassuring, seductive, deceptive syntax, but in that of questioning the effects of reality produced by our technicist universe.” Tonight, they will read “Ventre voyageur rouge”.

Clémence Gachot-Coniglio is a poet and visual artist with a degree in literature and performing arts from the University of Paris III and in research and creation from the University of Paris VIII. She trained in photography and drawing at the UDEM University of Montreal. Her texts are published in both recognized and emerging journals, mainly in Quebec and France. Gravitating around the experience of body and the self, her writing explores through poetry different techniques of subjectivity: esotericism, feminism, psychoanalysis… Recently she reads her texts for the Montreal Poetry Festival and published in the Haitian magazine IntranQu’Îllité. She is preparing a first collection from which the poem read tonight “Evadné.e” is taken.

The event will be available the next day as a podcast on our website and on YouTube.