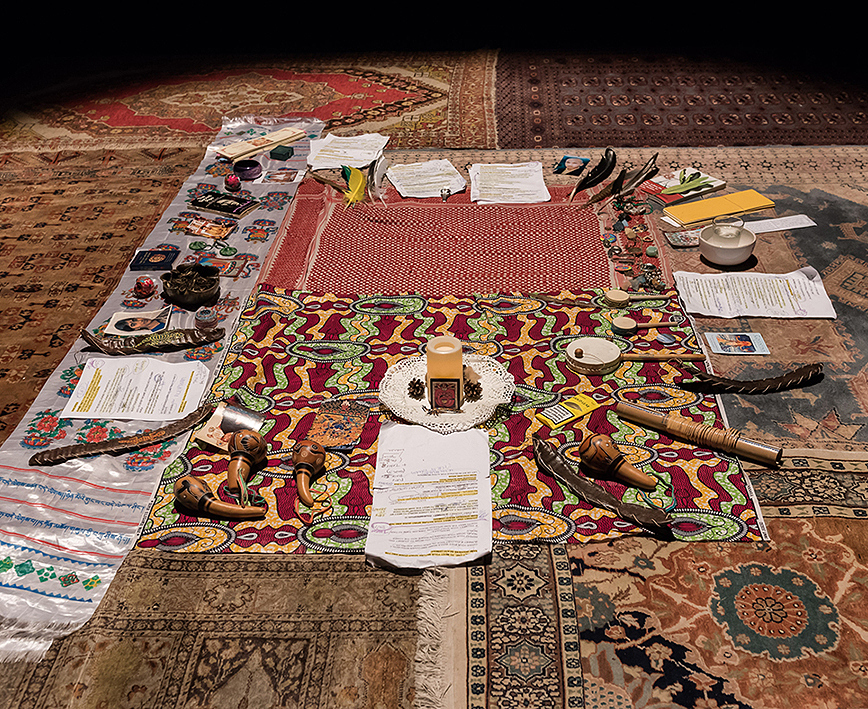 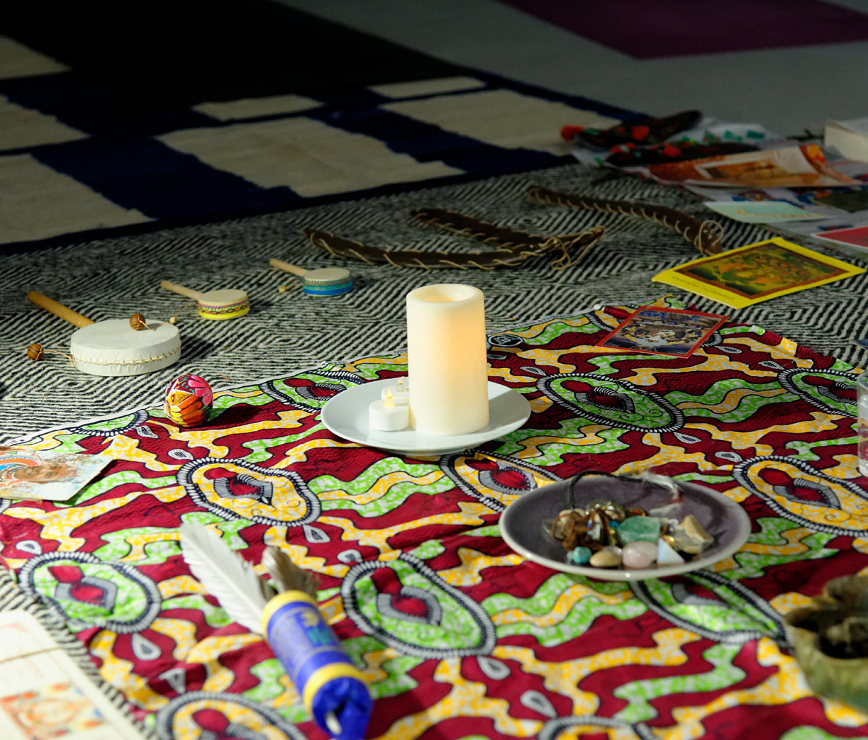 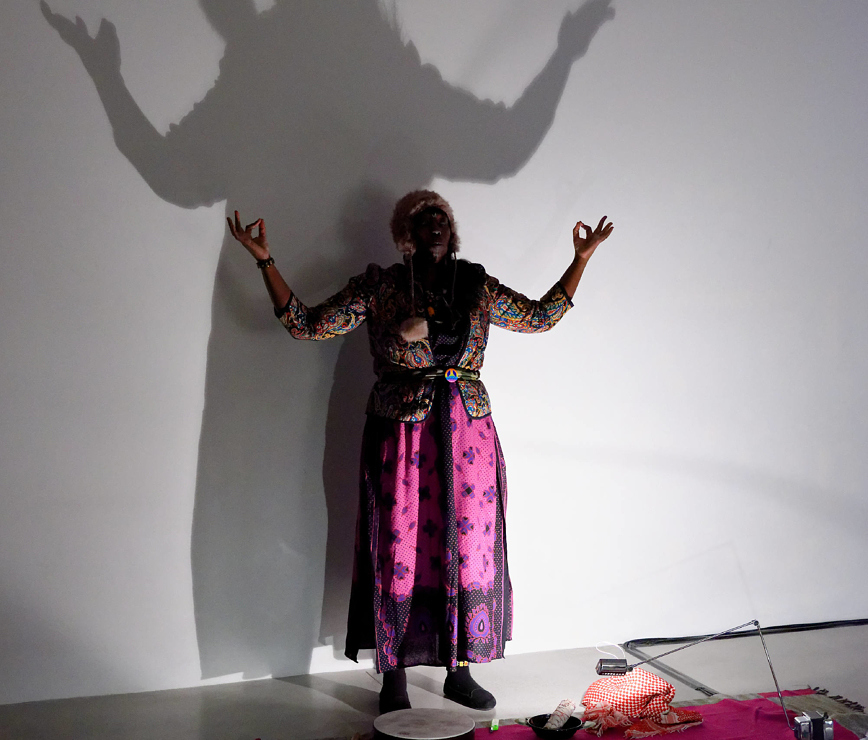 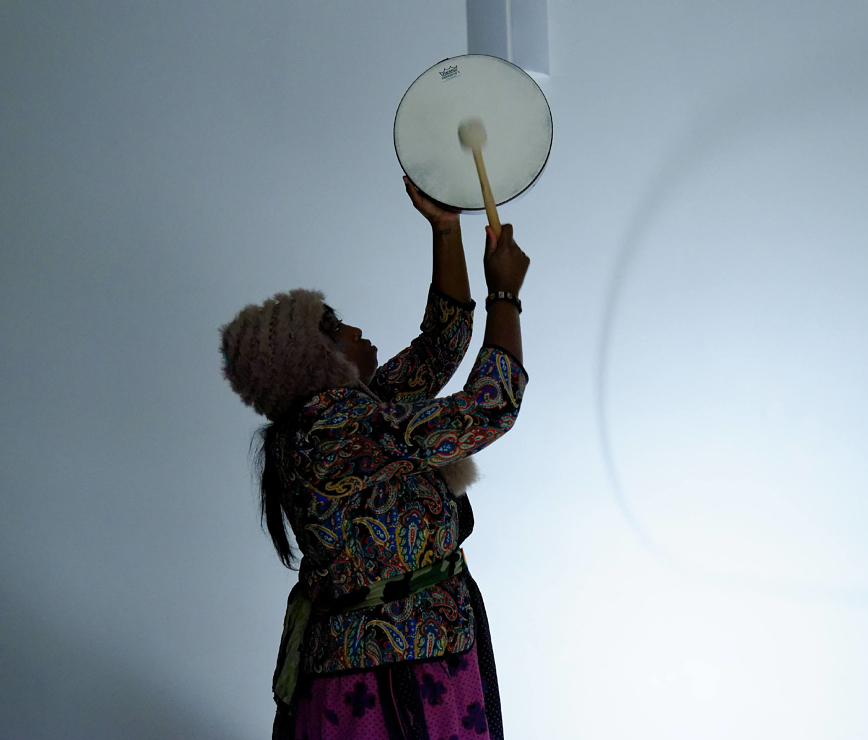 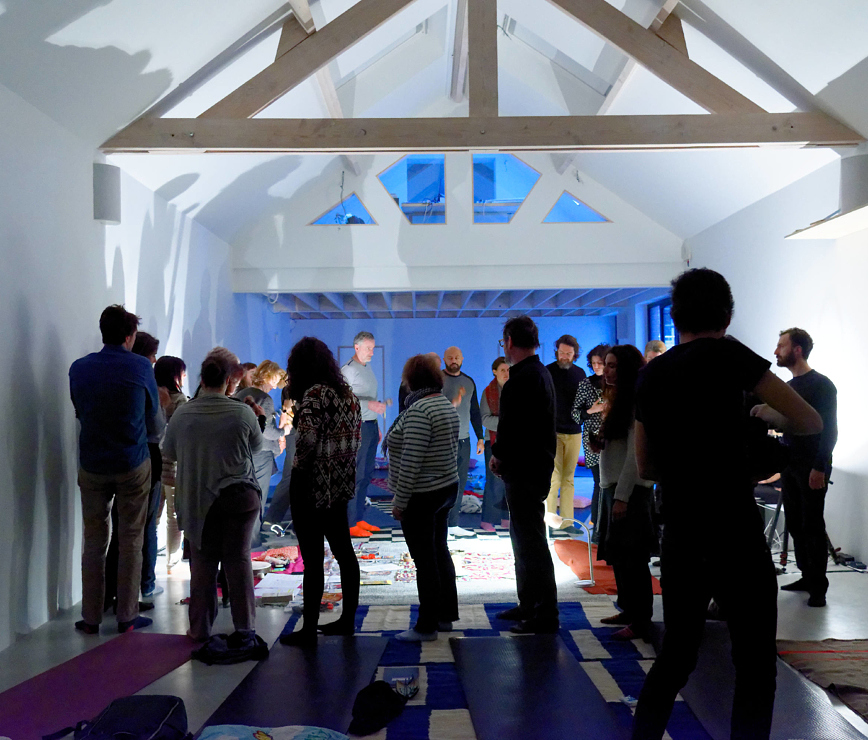 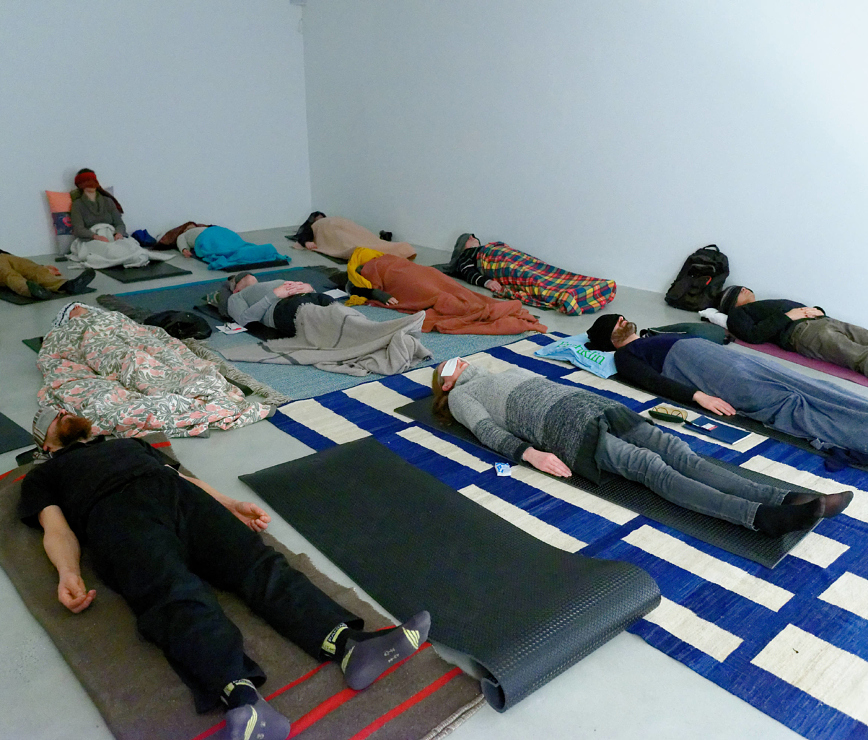 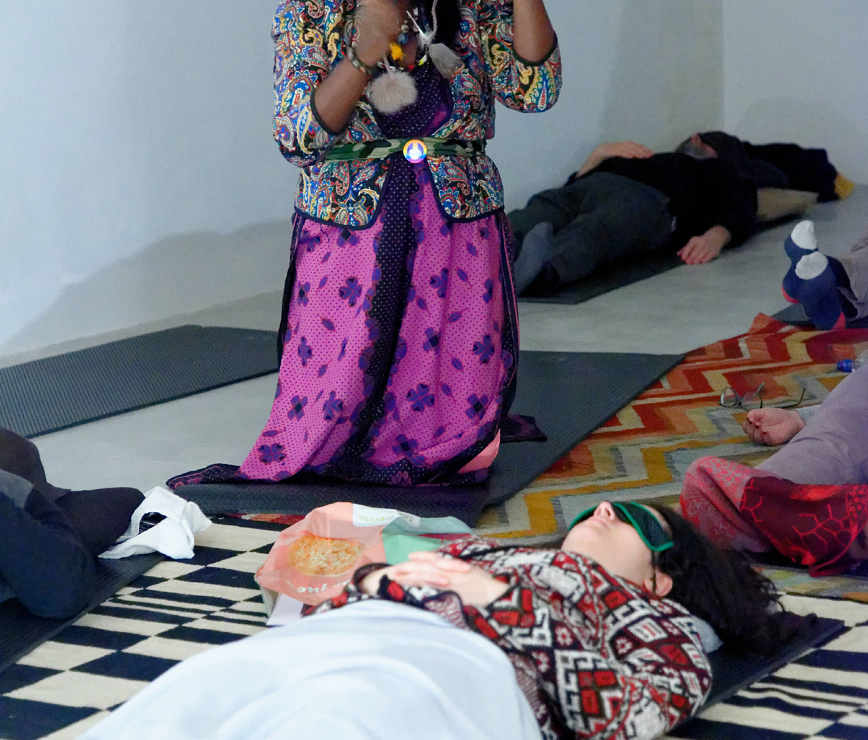 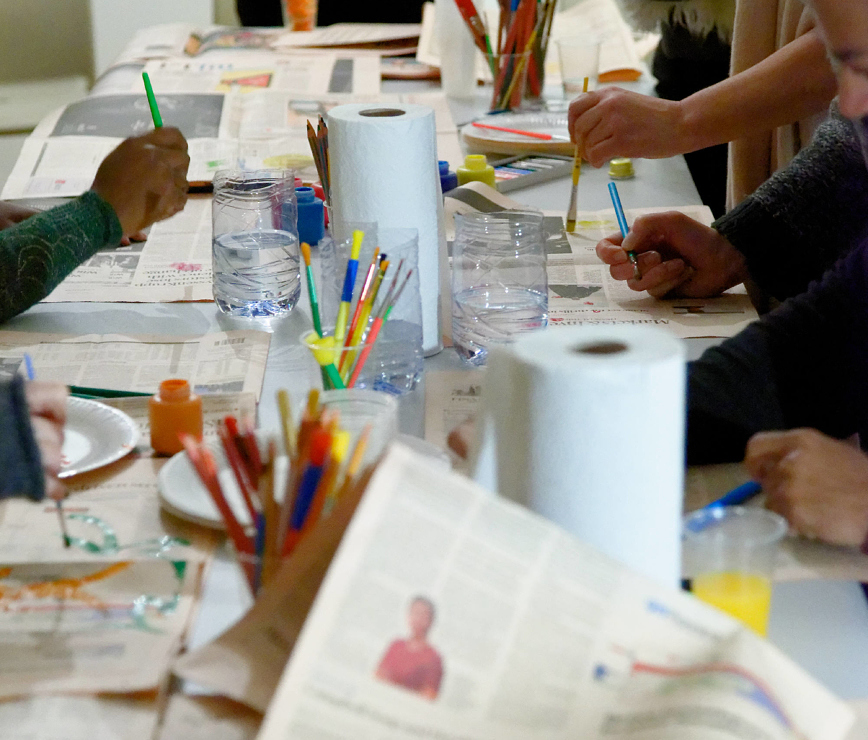 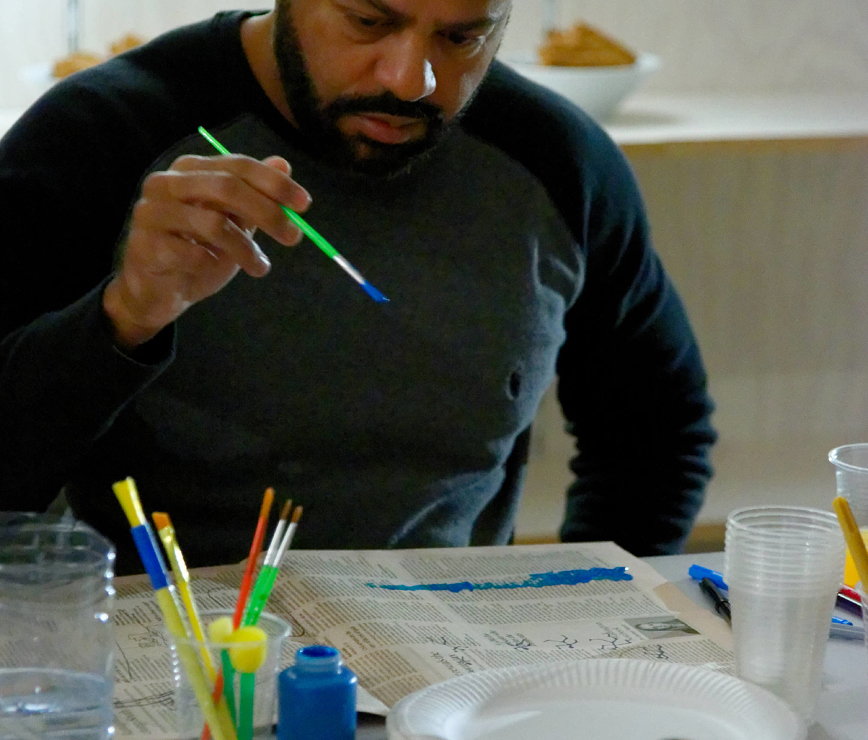 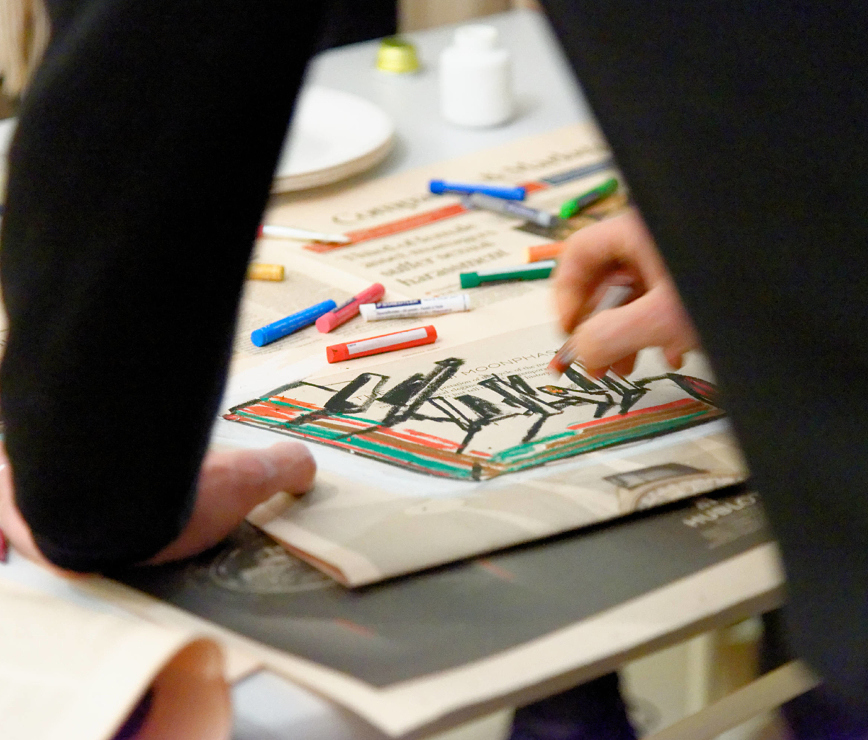 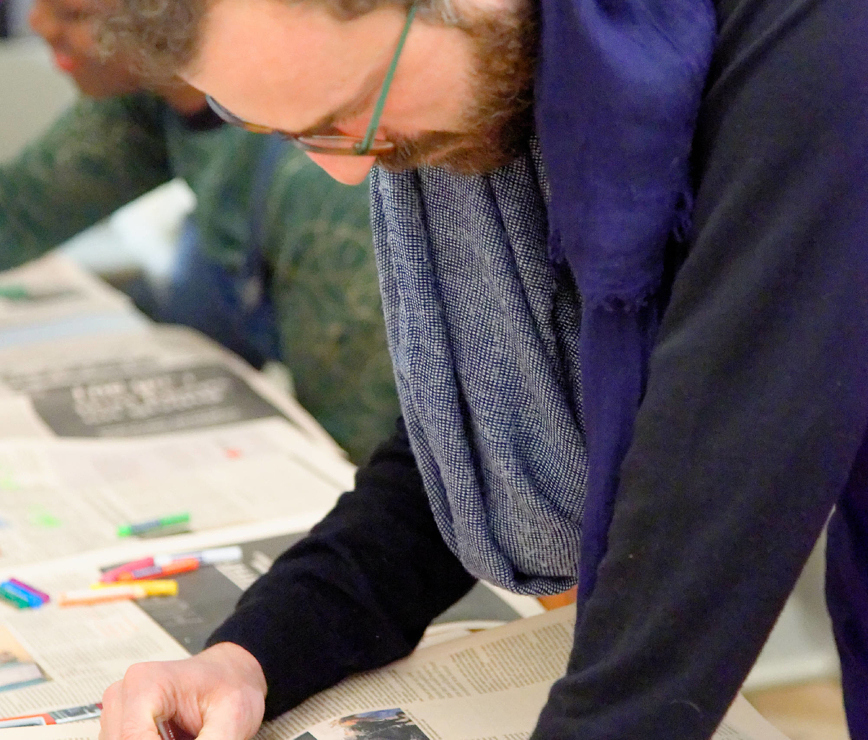 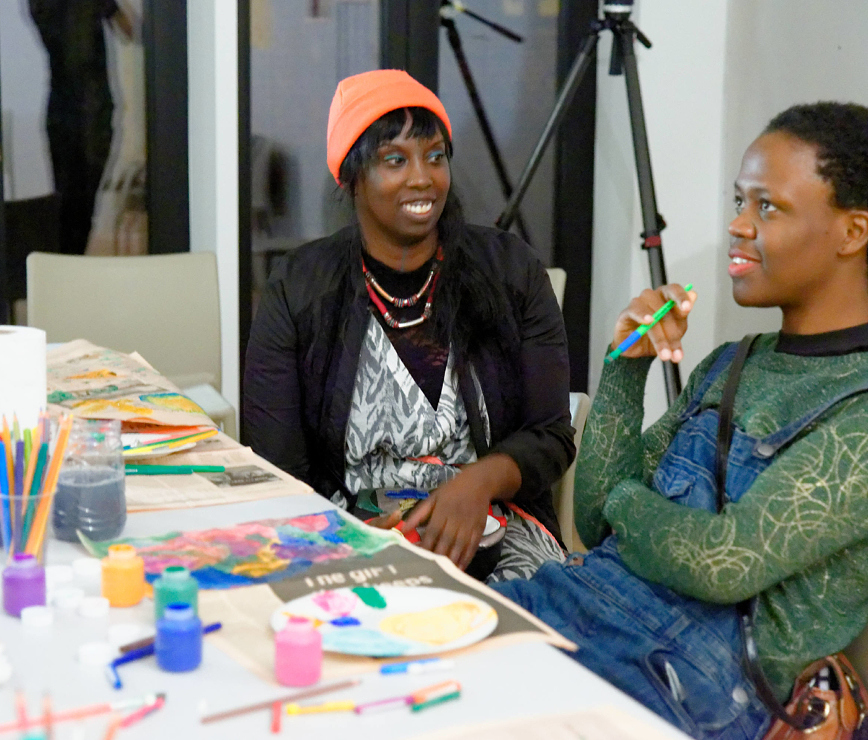 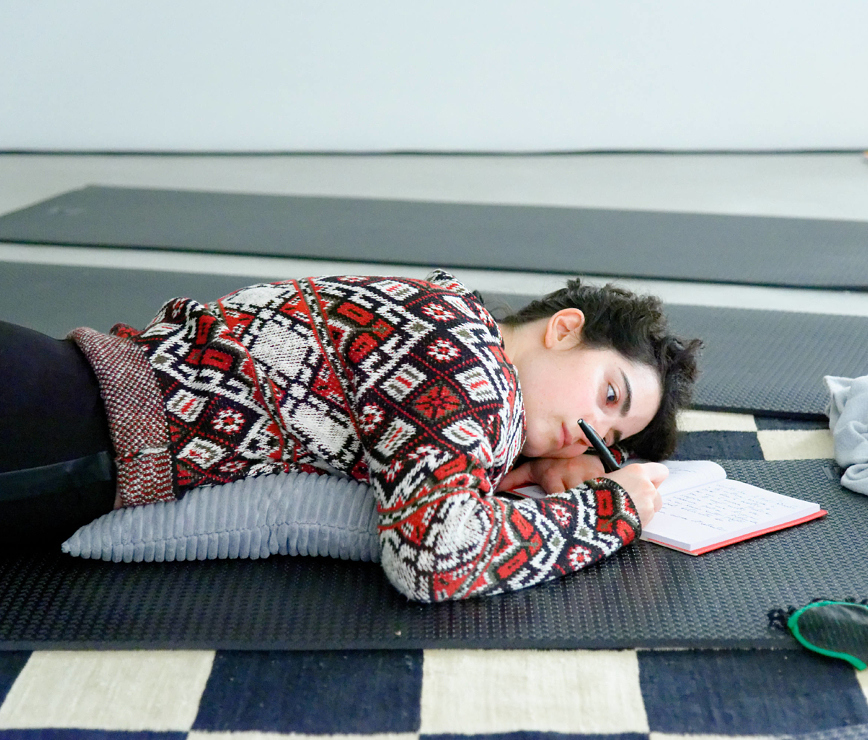 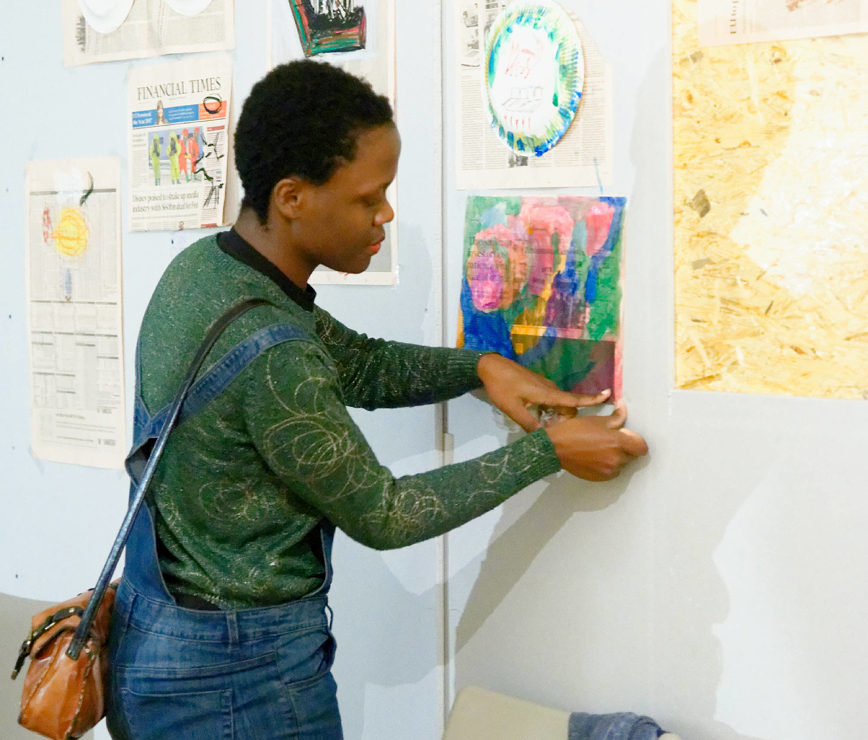 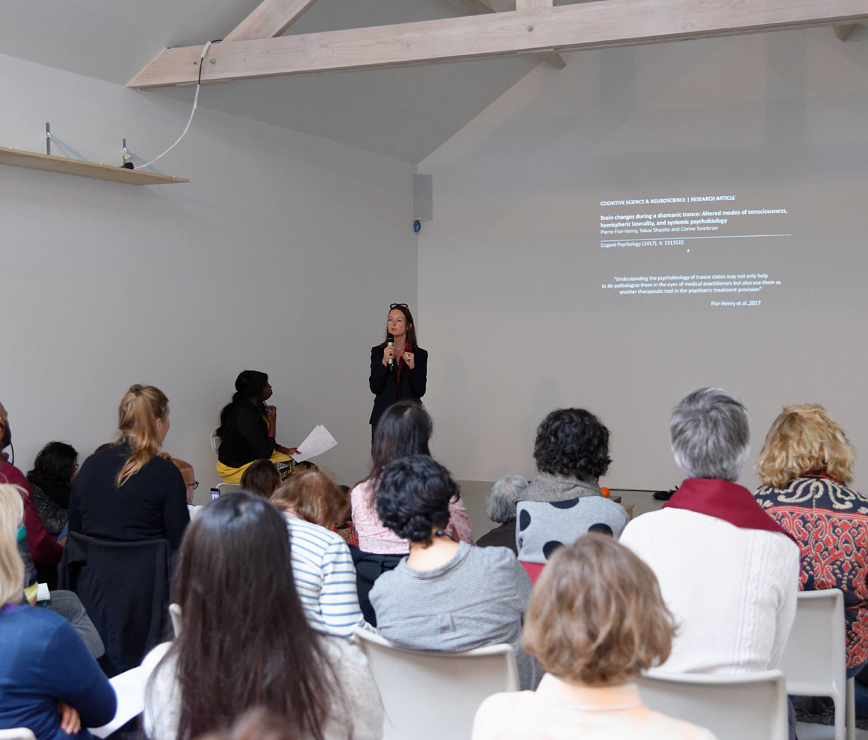 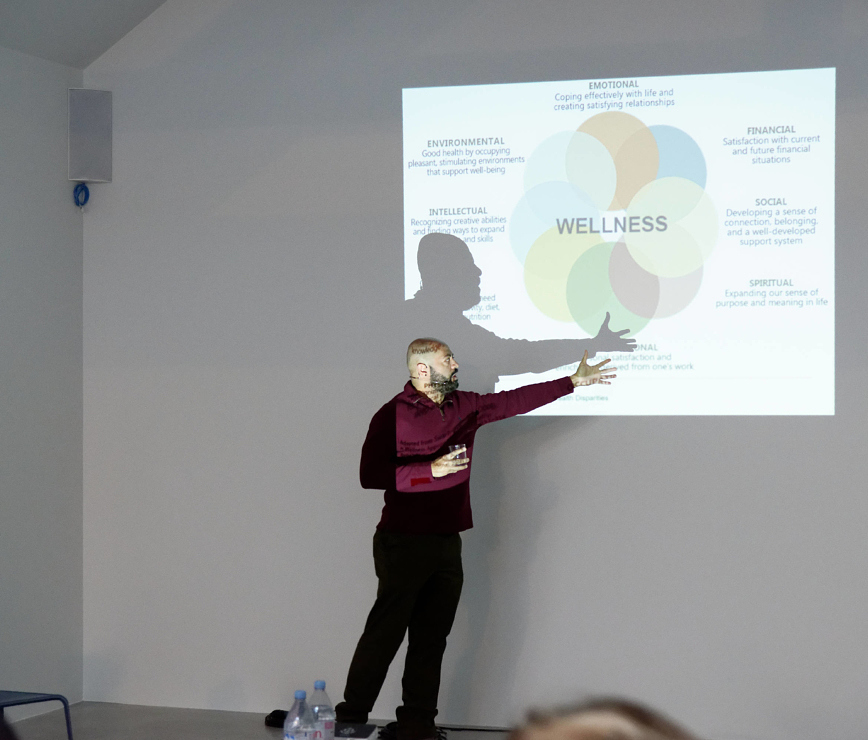 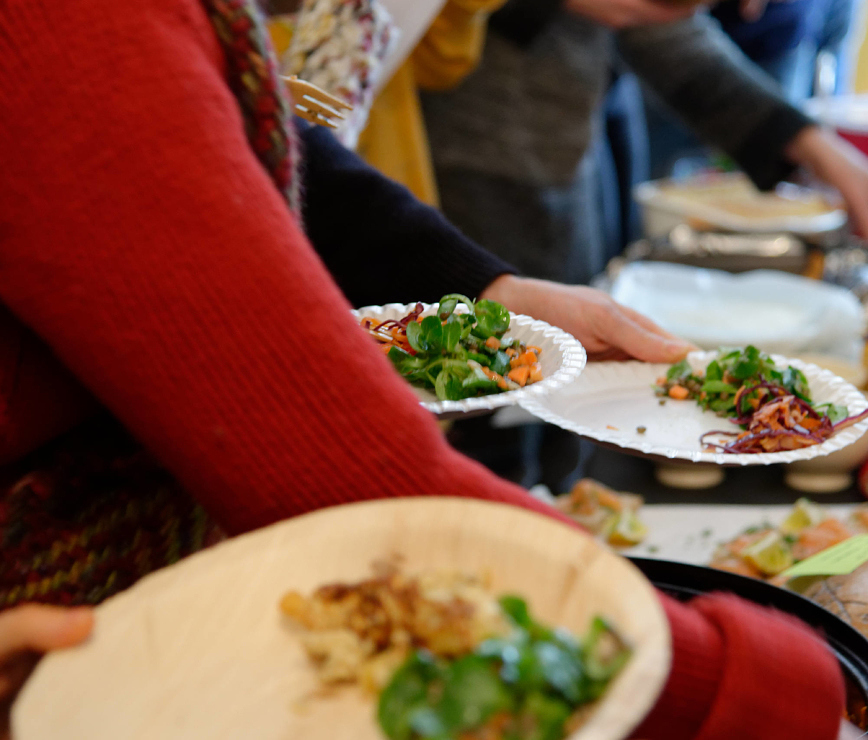 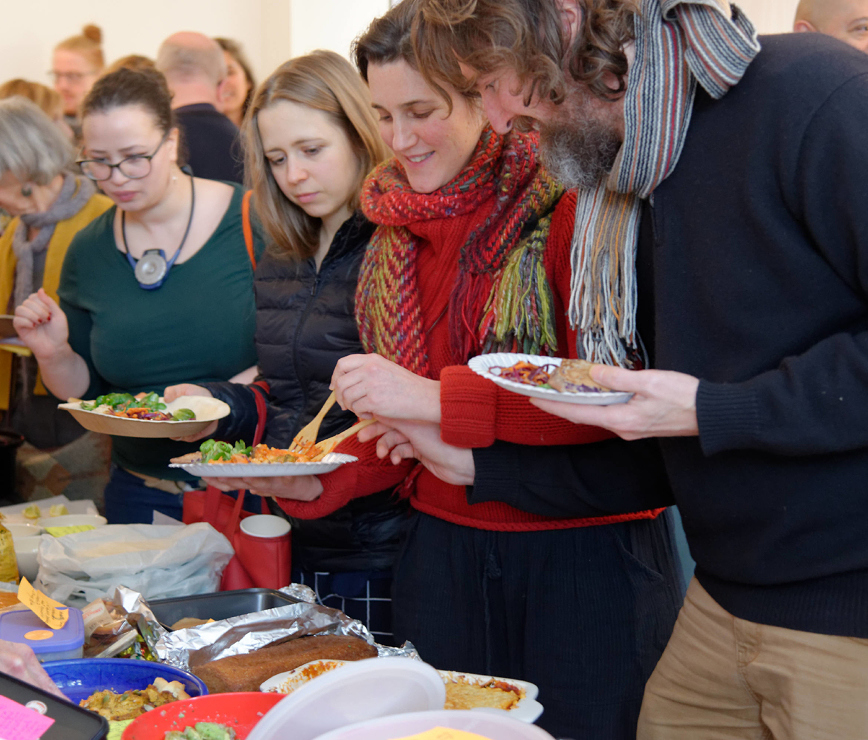 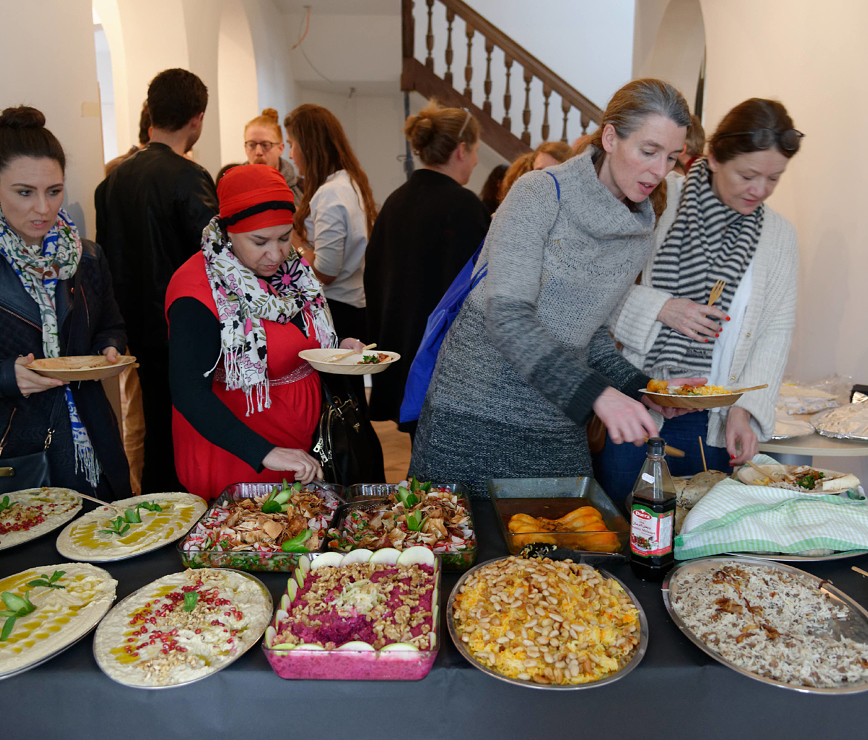 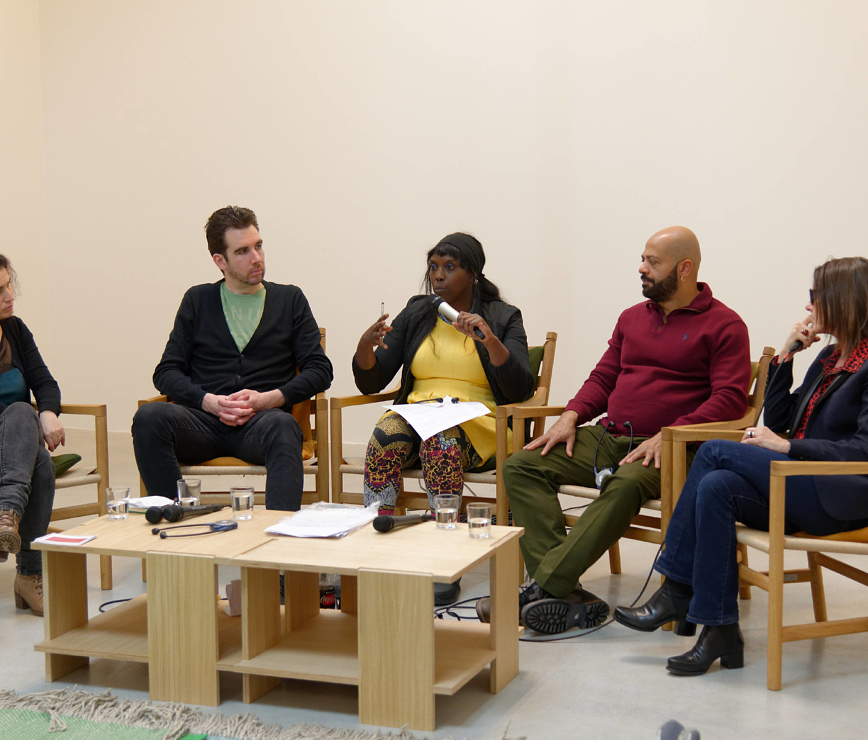 Grace Ndiritu proposes to invite two groups of people who do not normally meet, to participate in a living, political and social artwork. Her work entitled A Meal For My Ancestors: Healing the Museum will be a moment of sharing taking the form of a meal, lived as an artistic performance.

For her residency at the Foundation, she invites staff members of the UN, NATO and the EU Parliament; as well as refugees and migrants who have experienced traumas in their country of origin and who have migrated to Brussels. Using shamanic practice, one of the oldest forms of spirituality of humanity and meditation techniques, the artist will lead them through an initiatory journey. She organized several meditation classes with refugees before the Performance Day for Grace Ndiritu’s residency project at Fondation Thalie. It will involve activities such as Cooking Together with Syrian Chef Abdulrahman Aljassem, and a shamanic performance to ancestral lands. The following day Sunday 21st January there will be a final meal and talks and public round-tables organized with shamans, medical doctors, academics and activists from refugees (RANA) and migrants (AWSA) community groups to talk about the project and wider issues.

PROGRAM
11:00>12:00 Corine Sombrun on The effects of shamanic trance on Neurobiology
12:00>13:00 Kenneth D. Smith on Commensality – the social medical benefits of eating together
13:00>15:00 The meal – eating together (RSVP required, please bring a dish from your culture to share with others)
15:00>17:00 Panel discussion with Kenneth D. Smith, Corine Sombrun, Alicia Arbid and Jens Müller, moderated by Grace Ndiritu

PRACTICAL INFORMATION
Simultaneous interprétation in French and English with headphones
RSVP required by 19 January
Please email and tell us which dish from your culture you will bring: event@fondationthalie.org
Free entrance

BIOGRAPHY
Corine Sombrun (France) grew up in Africa. As a music journalist for the BBC World Service, she was invited to spent several months a year at the border with Siberia to undertake the rigorous and intense training to become a Shaman. And after eight years she thus became the first Western woman fully trained in the Mongolian shamanic tradition. She is the author of several books that have been translated into many languages and has been presented her research at TED and Google in California.

Kenneth D. Smith, Phd (USA), Ph.D. serves as the Director of the Center to Eliminate Health Disparities and the Director of Community Development and Health Policy at University of Texas Medical Branch (UTMB), Galveston Texas. Dr. Smith received his doctorate from Johns Hopkins Bloomberg School of Public Health, where he studied health economics and economic demography. Dr. Smith became a public health practitioner when he was appointed Director of Chronic Disease Prevention, Philadelphia Department of Public Health. Dr. Smith’s current research interests include systems science, social finance, and social isolation and was the Principal Investigator for a study on the health of refugee children in US. He is also a practicing Tibetan Buddhist.

Half Lebanese, half-Belgian, Alicia Arbid is born in the DRC in 1986. Specialized in Media and information Management, she currently works as the Coordinator of the Arab Women’s Solidarity Association-Belgium. For close to eight years, she has been developing knowledge and expertise on women’s rights with specific focus on Arab women, both immigrants and women whose families have lived in Belgium for several generations. As a feminist militant she engages in migration and sexual education issues with a gender perspective and grassroots experiences. Therefore, she is working with local associations, creating guidelines and organizing various activities with and for migrant women to advance gender equality and to improve their position both here and in the Arab countries. She is also active in different feminist networks, such as the European Network of Migrant Women. She is involved in the advocacy and general campaign for women’s rights, equality and justice, combating stereotypes and all forms of violence and discrimination against women and girls.

Jens Müller is the President of Refugees Are Not Alone (RANA), a non-profit association based in Brussels which purpose is to help refugees and asylum seekers to integrate into social and professional life in Belgium through individual support that seeks to make them autonomous. Beside, he works as Transport Policy Advisor to Michael Cramer, Member of the European Parliament.

With the collaboration of:

Public day of A Meal for My Ancestors: Healing the Museum by GRACE NDIRITU