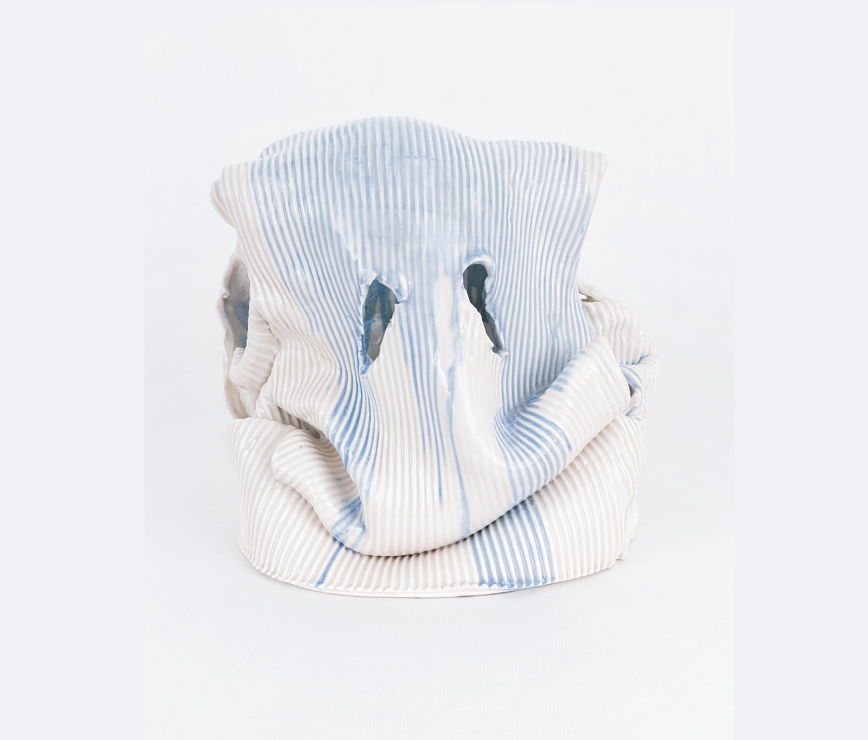 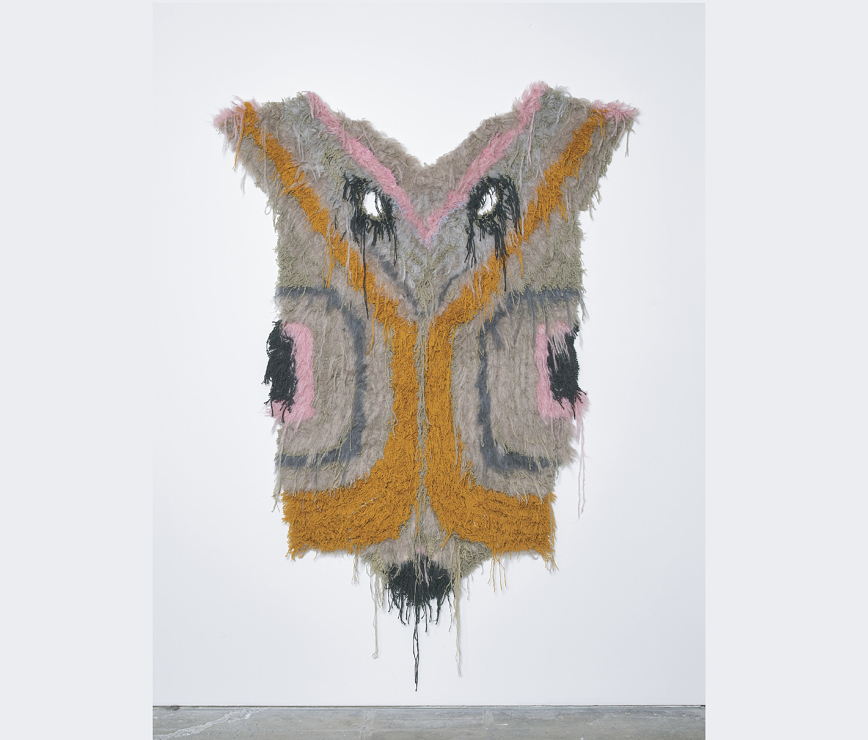 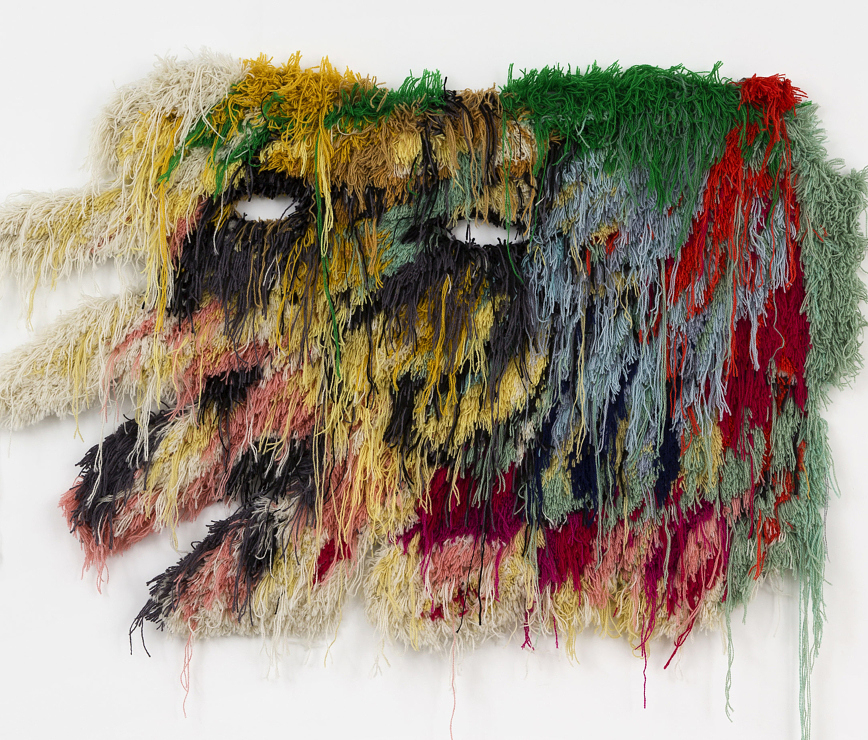 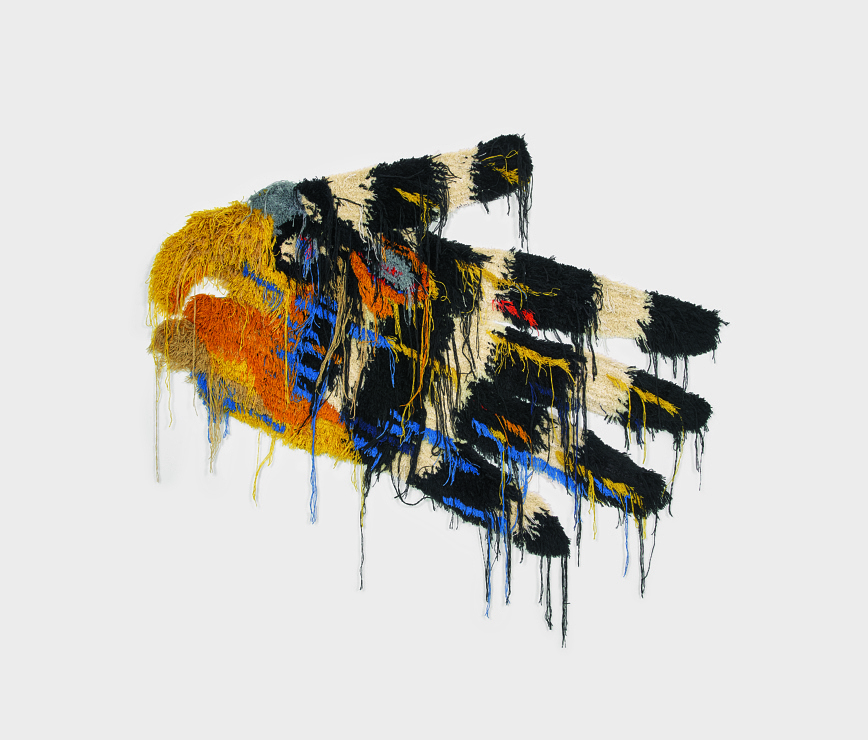 The Fondation Thalie is pleased to present Vue liquide, a monographic exhibition by Caroline Achaintre.

Tapisserie, watercolor, basketry, ceramics: the many traditional techniques Caroline Achaintre uses to create a carnival of the absurd. Her works are haggard, hysterical masks, captured in primitive cries. She creates openings, mouths, eyes, orifices. She seeks intensity in her work: « I am interested in primary sensations. This is why prehistoric art inspires me: everything is simply said and the superfluous is excluded. It is a very powerful art. Primitivism is visionary, at the heart of everything. My interest in European carnival folklore has its origins in the age-old tradition of masks, as much as in the caricature of society that carnival represents. »

While still a student, the artist created frescoes and installations: she designed large works, inspired by architectural forms. In 2002, in order to enlarge the scale and while retaining a form of domesticity, she transposed one of her drawings into tapestry. The tapestry denotes a movement towards sculpture but retains pictorial qualities. These works are massive, made of organic materials, often colored, requiring a long and tedious process: they occupy the space and play with the architecture that surrounds them. In 2008, her sculptural practice was established: Caroline Achaintre then moved to transpose her watercolors into objects, folding and mounting them onto pedestals. But the paper remains fragile. To overcome this, the artist seeks a material that can offer both malleability and stability. It will be the clay, worked into slabs. The work must maintain an ambiguity between volume and surface. If asked about the essence of her practice, she replies: “I consider myself a sculptor, even if my tapestries are between painting and sculpture. «

In her carefully composed exhibitions, the large, colorful tapestries interact with the supplely folded reptilian ceramics. The woolen pieces are inspired by German expressionism, the clay captures skin imprints, the watercolors are flowing … Caroline Achaintre constantly challenges the material to create sensual and extraordinary work. The artist works the material to breathe life into it: “I want my objects to have an immediate presence, and not to be the illustration of an idea or a reference. I am also very interested in anthropomorphism and the coexistence of several states in a single work of art, as a kind of multiplicity of personalities. Fluidity allows me to create this in-between, this state of tension!”

Her sculptures have an animist, half-animal, half-human presence, sometimes disturbing. The act of doing and labour is one of the important aspects of this work: Caroline Achaintre produces alone, in her workshop. She seeks physical and direct relationship with the material: “I need to touch the materials with which I work to discover their meaning, without this I cannot complete my projects. A dialogue must occur during the creative process, otherwise I end up losing touch with the work, no longer speaking its language. “

The tapestries require significant preparatory work (from drawing to weft and to the selection of wools). Ceramics and watercolor, on the other hand, draw their origins from a more intuitive, spontaneous gesture: it is a question of defining a shape before the clay dries. “The clay works are done fairly quickly, as quickly as the drying and firing allow. But the shaping of the clay must be fast and bold, otherwise it becomes laborious. On the other hand, a piece in wool requires a longer process”. The scale of her works as well as the manufacturing process (she works from back to front) requires more preparation. As for ceramics, Caroline Achaintre invented the formulas of her glazes. They have duller tones than those of her tapestries, however the light is always reflected from the sculptures, due to the shiny, wet looking surfaces.

It is therefore by matter and by doing, by stubbornness, by trial and error, that Caroline Achaintre has managed over time to construct an existential and paradoxical work. Existential: her masks convey a grimacing and funny image, all the same (we haven’t talked about Caroline’s humor, we have to read the titles of her works). Paradoxical: Inspired by centuries-old traditions, the artist shows us a distinguished contemporary plastic  rendering and a language with an immediately recognizable style.

Born in 1969 in France, raised in Germany, based in the United Kingdom, Caroline Achaintre is an internationally renowned artist. After training as a blacksmith, she studied fine arts in London. Her first works were on paper, then she worked with wool from 2002, with clay in 2009, wicker in 2010 and experimented with costumes and performance in 2015. Influenced by post-war British sculpture, the early arts, Memphis design, urban cultures (goth or metal music, horror films, science fiction, etc.), she has developed a unique portfolio of work.

As part of EXTRA, with the support of the French Institute and the Cooperation and Cultural Action Service of the French Embassy in Belgium