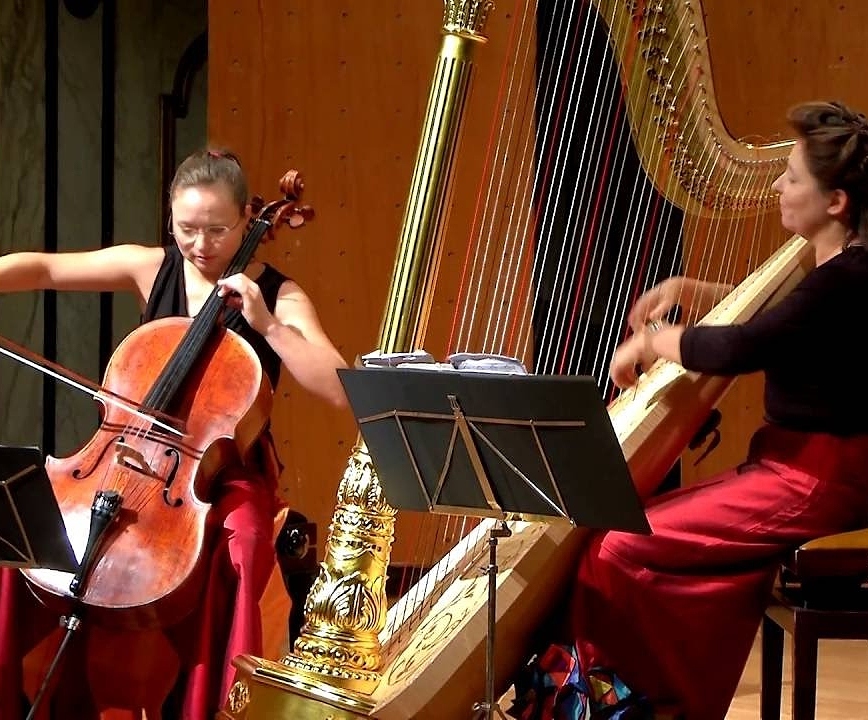 Marie Hallynck (cello)
A well-established soloist, chamber musician and passionate teacher of music, Marie Hallynck is one of the key cellists of her generation. Her career has taken her to such prestigious venues as the Amsterdam Concertgebouw, the Vienna Musikverein, Wigmore Hall in London, the Birmingham Symphony Hall, the Palais des Beaux-Arts in Brussels, la Cité de la Musique Paris… She has received various awards including: prizes at the celebrated Eurovision classical music competition and the Tromp competition (Eindhoven) in 1992, honorary diplomas from the Salzburg Mozarteum and the Accademia Chigiana of Siena and the Belgian Fondation de la Vocation Prize in 1993. She is also a laureate of the Juventus Association and the Emile Bernheim Foundation (1996). In 2002, she was voted “Soloist of the Year” by the Belgian musical press union.

Sophie Hallynck (harp)
After graduating from the Conservatoire National Supérieur de Paris, she returned to Belgium, where studied with Francette Bartholomée at the Royal Conservatory of Music in Brussels, graduating with highest honours in harp and chamber music. She regularly performs as a soloist with various orchestras such as the orchestra of the St. Petersburg Chamber Orchestra, the Royal Conservatory of Music Orchestra, the Royal Opera of Wallonia, the Orchestre Philharmonique de Liège et la Communauté française de Belgique. She currently teaches harp and chamber music at two Belgian universities: the IMEP in Namur and the Hogeschool Antwerpen.