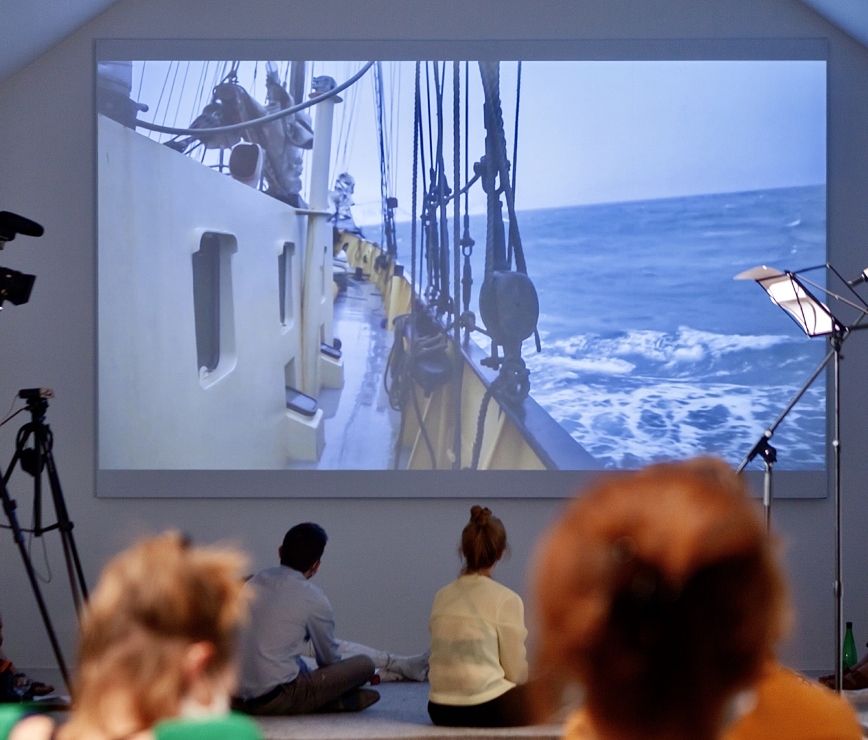 « There is great freedom in fragility, it is not barricaded. May our poems resemble it. »
— Clara Molloy

To interact with readers, please register here.
This free access event will be live broadcast on the event’s webpage from 6 p.m to 8 p.m.

November is the passage, the transformation, it comes after an Indian summer, after the last harvest; it is the very end of the afternoon, before winter’s night; it is the planned decay of foliage that flies away in a dreaming of rebirth, distant but tenacious. November… the word itself contains its own mystery, November counts words and days, the vulnerable force of creation, November, as …

Reading more. Writing. One should write with as many words as possible, in all languages: the multiplication of words, their profusion, their transformations protect us from thinning.
So, writing and reading,
out loud
poetry

Strange practice that writing, which definitely escapes from reasonable reason: a wide effort for a little glory – but for so much fire, for so many flames, which carry us again and again, one to another. The magic of poetry, from solstices to equinoxes, gathers a community of poets: The Appeared Poets Society. The fragility in each one of us becomes the strength of all of us.

1) Clara MOLLOY (in French)
Clara Molloy is a poet, but also the creator and editor of the fragrances of the brands Memo Paris, Floraïku and Hermetica. She has created Créations, and a festival of visual poetry.
Last year she published Tempe a paia in Cheyne’s grey collection.
Her reading is entitled Paia (the straw).
The straw as a symbol of fragility. The seed and the bread of the poem.
Poetry as the meeting of time, endless and ephemeral, of the perishable.

2) Catherine PONT HUMBERT (in French)
Writer, journalist, long-term producer at France Culture, and poet.
The poems she has selected come from her collection “Légère est la vie parfois” published by Jacques André in 2020.
Her reading is entitled “Il existe des lieux de songe” (“There are places of dream”).
It speaks about the essential fragility, the one of Life Path which tends towards fulfilment, bumping into obstacles, turning off, interrupting, rushing again, a fragile path where what is deep becomes so light.

3) Brice CATHERIN (in French and English)
A virtuoso cellist, Brice Catherin decided at the age of 36 that love is the most important. He then decided to devote himself entirely to it through poetic collaborations — with Cléa Chopard.
His reading is entitled Rhododendron Normal, poèmes ratées (failed poems).
A selection of poems that will be published in 2021 by éditions Grimaces, signed by “Brice Catherin, Cléa Chopard and their guests”, they speak of the fragility of a prohibited love, and the fragility of a residence permit.

4) Carmen CAMPO REAL (in French)
Carmen leads a career as a journalist for TF1 in Paris and wrote for Vogue and Elle Magazine. She is a poet and has published four collections of poems with Slatkine, in 2009, 2010, 2014 and 2018.
Her reading is untitled.
Her poems talk about the wobbly, the fragility seen as an imbalance, a fracture…

5) Nathalie GUIOT (in French)
She created Fondation Thalie. Behind the Foundation, or in front of it, there is Nathalie Guiot, supporting women artists, creation and ecology, books and poetry… these Equinoxes evenings exist thanks to her.
Her reading is entitled Métamorphoses of Emanuele Coccia (excerpts)
It speaks to us of the fragility of our world – of despair and possible reparation – of our future transformations.

6) Joana PREISS (in French)
Joana Preiss is theatre and cinema actress, as well as a singer, performer and director. She regularly gives public readings of poetic works, and recently performed a reading of Anaïs Nin at the Maison de la Poésie, in Paris.
Her reading is entitled L’aventure ! By Girogio Agamben (excerpt)
Our fragile life adventures…

7) Rosanna GANGEMI (in Italian and French)
Philosopher of art, specialised in feminist literature of the 19th and 20th centuries, lecturer and author. Lecturer at the University of Paris-Est Marne-la-Vallée, she is also working at the ULB and the Sorbonne. She has just published Tra due rive. Autrici del Novecento europeo sul confino e sull’esilio.
Her reading is extracted from poems of Alda Merini
As we listen to Alda Merini’s poems, we hear the fragility and strength of a woman, and how the embraced fragility becomes strength.

8) Aurélie GRAVAS (in music)
Painter and musician. She will tell us a text in music playing bass with Luc van Lieshout on trumpet.
Her music is called Tu veux un café (You want a coffee)
Yes we want a coffee ! This text deals with the ambiguous relationship between a night watchman and a woman artist, they share an underground cloakroom for one night.

9) Astrid HAERENS (in Flemish)
Poetess living in Ixelles. She writes poems, as one says with an eye for detail.
Her readings are entitled Brieven aan mijn onbestaand kind”(Letters to my non-existing child) and Vrij (Free).
The first is a letter written to the child she did not have. To the non-existent one. She tells us, at 31, about the fragile relationship between motherhood and poetic/artistic creativity. The second is about Anarcha Westcott, an American slave who underwent various experimental surgical operations and deals with the fragility of women’s bodies.

10) Golnoosh NOURPANAH (in English)
Author, poet originally from Iran, Golnoosh Nourpanah is close to the New River Press and Poetry Against Homelessness Groups, she has just published “short stories” by Muswell Press. “Golnoosh’s unflinching writing explores sex and religion, love and cruelty, and rebellion and identity, with energy, precision and poise. »
Her reading is entitled Sculptures
And talks about the fragility of desire and sexuality underlining the necessary strength to be queer – to be fluid.

11) Heathcote RUTHVEN (in English)
Heathcote is a writer and publisher, also close to New River Press Group. He is also a contributor to Poetry Against Homelessness, he is working on a poetry book with Miranda Gold, and writes for the International Times, The Idler, The Indepedent among others.
His reading is entitled Dub Night
His poem is about his friend Jamie who died in her early twenties. About the fragility of love and grief.

12) Astrid CHAFFRINGEON (in French)
Author, gallery owner and publisher. She has published several novels; the latest one, Je ne chasse pas sur mon territoire, has just been published by Eléments de Langage announcing the 2020 literary season: “a feminist novel with bewitching force”. She wrote a text especially for this evening.
Her reading is entitled La part des choses
It evokes the abyss that offers itself to us at the fall of a love night, the fragility of love as a privilege, this pain that makes us alive, as being fragile means to be strong in rhythm with the pulsations of the whole world.

13) Céline FRIBOURG (in French)
Passionate editor of remarquable art books, bringing together photographers and writers in her publishing house Take 5 which she created and runs alone, she is also a writer and poet.
Her reading is entitled KINTSUGI: How to use a philosophical construction outside of space and time – in dialogue with the Trauma photography series of Joan Fontcuberta.
Among other things, it suggests that we “remember the impermanence of things and reassure ourselves by noting to what extent our intrinsic fragility is the basis of our durability.”

14) Christine GUINARD (in French)
Poet, author including Sténopé, a volume of poetry that “tempts the cry, always, again, in front of those who are excluded, thrown away, rejected, brothers, sisters, of this territory of which we are a little bit you and me, all of us, of this humanity which is forgotten…”
Her reading is entitled Vous étiez un monde (You were a world)
Provides from the eponymous manuscript about to be published and which evokes fragility, collapse, and what words can bring back to life.

16) Manuela MORGAINE (in French)
Writer, director and filmmaker, she has directed Envers Compagnie. Laureate of “Prix de Rome” in 1994 and the Villa Medici Hors les Murs in 2004, she recently published Le Temps a commencé de Cesser – Poèmes Oraculaires by Fabulla editions.
Her reading is entitled LAST WORDS
Excerpts from a collection of unpublished texts GESTES, on the theme of human fragility, the one that matters at a time where we count our sick and our dead.

17) Barbara POLLA (in French)
Barbara arranged this Reading list.
Her reading is entitled Peines mineures – and Il me semble
Peines mineures was written by the photographer Valérie Horwitz, who works in detention centre with young inmates. It talks about the fragility of freedom. Il me semble is a tribute to Samuel Paty.

Registration here
Live broadcast on our website from 6 pm to 8 pm.
N.B: Check out the image window to watch in live on our website.

Escape with our poetic readings available as podcasts on our site.
Stay tuned on Facebook and Instagram!

You can interact in this event with registration